What I learned in Springfield 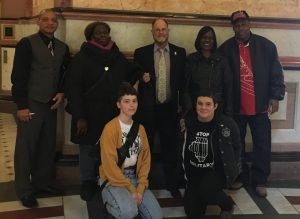 Yesterday, I traveled to Springfield to attend a meeting of JCAR to consider regulations proposed by the Illinois Department of Corrections, about changes in the way Illinois keeps people in solitary confinement in its prisons. Between 6am and the time I arrived, the meeting time had been changed, so I missed the meeting. While I was on the road, the Department said that it would “continue” working with the Stop Solitary Coalition. However, the Department hasn’t ever worked with the Stop Solitary Coalition in the first place. JCAR then unanimously approved the regulations proposed by the department.

JCAR is a little known (and less understood) part of state government—which is too bad, because it plays a really important role in regulating our lives. JCAR stands for the Joint Committee on Administrative Regulations. It is a committee of the legislature, but unlike every other committee it includes members from both the House and the Senate, and the votes it takes are final—the matters that come before it never go to the full legislature for consideration.

What JCAR does is pass on every single regulation proposed by any agency of state government. When the legislature passes a law, that law almost always leaves lots of blanks which need to be filled in before the law can actually be implemented. For example, Illinois law says that the Department of Corrections must have a disciplinary process. But it says nothing about when charges need to be filed, what forms should be used, who hears disciplinary charges, or what punishments should be imposed. Instead, all of those details are left to the Department of Corrections to figure out and put into a regulation.

The process of creating a regulation is complex. A detailed description is here. When a department proposes to issue a regulation, its proposal is published, but not in a user-friendly format. The public is given a chance to comment. After (hopefully) considering public input, the Department decides on a final proposal, and submits that proposal to JCAR for review. JCAR cannot rewrite a regulation, but can send it back to the Department for revisions, or it can approve it.

The entire process is pretty opaque. There are hundreds of regulations, and new ones are proposed every week. You can sign up to be notified of all the proposed changes—but there is no way to sign up for changes to (for example) just regulations relating to corrections. The comments submitted by the public are not available online, and the Department does not publicly explain why it accepted or rejected any particular comment from the public. Similarly, JCAR’s agenda is listed on its website, but not in plain English. All that is available are a series of meaningless numbers. Finally, while JCAR’s formal meetings are public, the public is not allowed to address the members at these meetings—all comments must be submitted in advance, in writing. The system is designed so that only professional lobbyists can be expected to keep track of the process. Ordinary citizens don’t have a chance.

A few weeks ago, I attended a meeting about solitary regulations (the same ones that were addressed yesterday) called by JCAR, at which I and the Illinois Department of Corrections were invited to discuss our points of view with the JCAR staff. From that meeting (and the time change of the meeting yesterday), it is clear is that winning major changes to proposed regulations requires either committed lobbying by insider groups, or massive public protests. (The best example of both is the extended fightover Illinois’ fracking regulations.)

While there has been a huge increase in public awareness of issues surrounding prisons in general, and the excessive use of solitary in particular, prisoners and their families simply do not have an army of professional lobbyists. And at least for now, the organizing infrastructure has not been built so that thousands of people can be mobilized to oppose bad regulations (or support good ones). Winning victories through the regulatory process is therefore still a longshot.

So, is it worth doing? Was it wise for me to spend two days driving to Springfield for a one-hour informal meeting at JCAR, and then driving back to Chicago? Despite the frustration, I think it was. The Illinois Department of Corrections made it clear that they were not going to voluntarily change the proposed regulations, and the JCAR staff is going to support them. But it was also clear IDOC realized they need to do more. They admitted that this needed to be a first step, not an end goal. They were very aware that a bill was before the legislature which goes much further than do their proposed regulations. They were very aware that there is a court case (UPLC’s) pending which alleges that, even with the proposed changes, Illinois’ excessive use of solitary in unconstitutional. But most importantly, they are very aware that many people are watching what they do, and that the public will continue to demand more.

What lesson can we draw from this? First, we need to build a much better organizing structure to figure out how to effectively mobilize all the people who care about mass incarceration. Second, we need to continue to make demands outside of the formal legal/political process. Third, we must continually demand that these legal processes become more user-friendly for members of the general public, and less designed only for professional lobbyists. (This is true of the process for letting your legislators know that you support or oppose pieces of legislation too—it should not take a full page of instructions for ordinary people to fill out a simple online form.) Finally, even if we have to fight in a hostile environment where victories are few and far between, it is important to show up in those spaces. We need to be visible, and we need to ensure that prisoners’ interests are represented.

We are noticed, even if we don’t prevail…yet.