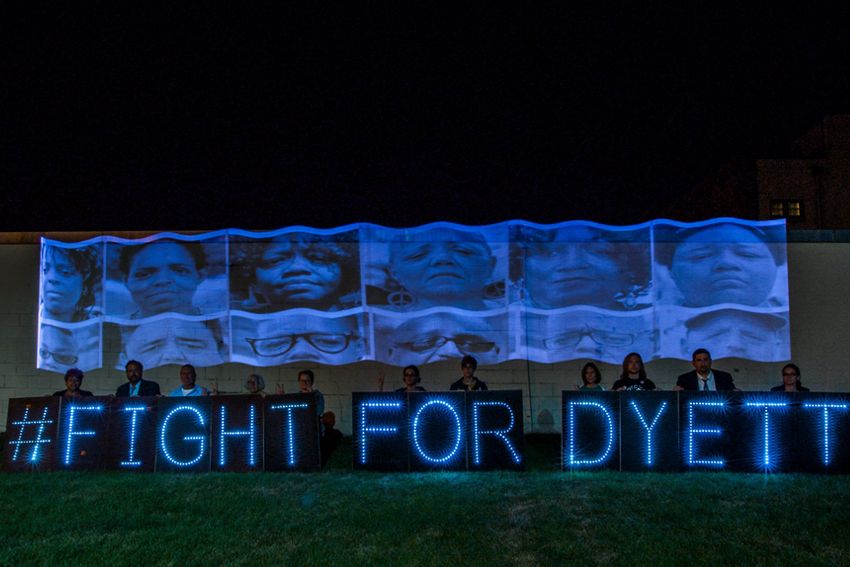 A dozen activists are slowly starving themselves, now entering the third week of a hunger strike demanding that the mayor and the Board of Education save Bronzeville’s only community high school. Hunger strikes have a long history, dating back to feudal times. The mythology is that if a man starved himself to death on the offending party’s doorstep, then his demands had to be met—because who would starve themselves to death for an unjust cause? Hunger strikes have a storied history in more recent years as well. Mandela embarked on a lengthy hunger strike shortly after being imprisoned by apartheid South Africa. The prisoners at Guantanamo are currently engaged in a year-plus hunger strike—kept alive because the U.S. government straps them down daily and force-feeds them. Perhaps most dramatically, the Irish, in their battle lead by Bobbie Sands against British occupation , started a rolling hunger strike that continued until ten political prisoners died. These cases are remarkable not just for the dedication of the hunger strikers, but because in each case the hunger strike arose from, and was an integral part of, a larger organizing effort. The Dyett hunger strikers continue this tradition.

Despite their willingness to sacrifice their time, health, and perhaps very lives, the city and members of the press have dismissed the hunger strikers, labelling them as “hostage takers” trying to force the city to provide a “particular type of new school” in their community. This cavalier dismissal of the hunger strikers’ commitment, and the very serious issues facing the community, reeks of middle-class White privilege.

Bronzeville is a neighborhood with a rich cultural history, located in the heart of Chicago’s “black belt,” where Black people were forced to live as they moved to Chicago during the Great Migration in the early 20th century. Ida B. Wells, Richard Wright, Gwendolyn Brooks, and Louis Armstrong all called Bronzeville home. Today, the people who live in Bronzeville remain overwhelmingly Black. The neighborhood contains an eclectic mix of elegant single-family homes, rehabbed apartments converted to condominiums, new construction, and run-down rental units, with vacant lots scattered throughout.

The city has engaged in massive disinvestment from Bronzeville. By one count, the city has closed 16 elementary schools in Bronzeville since 1998. These closings have left gaping holes in the neighborhood. Students have been shuffled from school to school, and any sense of neighborhood schools has been destroyed. Today, Bronzeville has exactly one community high school left—Dyett. This is the school the hunger strikers are trying to save.

The hunger strike did not come from nowhere. Rather, it is the culmination of five years of intense grassroots community organizing to rebuild its community-based education system that Chicago’s powers that be have worked so hard to destroy. Lead by the Kenwood Oakland Community Organization (commonly known as “KOCO”), parents and community leaders created a plan which called for an educational continuum, where grade schools, middle schools, and Dyett High School all worked together on a common curriculum, where each grade prepared students for the next grade—whether that grade was in the next classroom, or in an entirely different school. This effort brought the community and the schools closer together, involving parents and community residents directly in the schools. Instead of places where kids involuntarily sat for six hours a day, the schools began to fulfill the role they were always intended to fill—forming the center of a vibrant community. Children from different blocks would get to know each other by going to school together year after year, parents would know other parents and their children through school activities, and the community would see the schools as education centers for the entire community.

For those like me, who grew up in solidly middle–class, largely White areas, neighborhood schools were taken for granted. I didn’t know of any kids on my block growing up who did not attend the local elementary school with me. A few of my friends went to religious schools after they finished elementary school, and a very few went off to private school, but almost everyone headed to the local middle school, and then to the local high school. But this has not been the historical experience for many Black families in the U.S. Before school desegregation, many Black students were bussed past their local (all-White) schools to a far-off Black school. In Chicago over the last decade, the city has increasingly developed a two-tier educational system: one system of elite schools for the select 10% or so of the very best students; a few charter or other selective-enrollment schools (some great, some good, many terrible); and run-down, neglected schools for everyone else.

The grassroots movement in Bronzeville to revitalize its public schools was sabotaged by the city and the Chicago Board of Education (whose members are all appointed by the mayor). Four years ago, the city announced that Dyett would be closed in 2015. The Board of Education stopped enrolling new students, but allowed current students to finish. Last Spring, the final class of 13 students graduated. Again, the community did not accept this decision quietly. The community formed the Coalition to Revitalize Dyett High School and worked to produce a proposal. Working with partners from University of Illinois at Chicago’s College of Education, the Chicago Teachers Union, the DuSable Museum of African-American History, the Chicago Botanic Garden, and other not-for-profits, the community produced a plan for “The Dyett Global Leadership and Green Technology Community High School.” The plan called for rehabbing the building to become LEED-certified for green technology, and developed a curriculum focused on science, taking advantage of the school’s location next to a park.

In 2014, the city rejected the community’s proposal, but did agree after intense pressure to accept proposals from private organizations to operate the school on behalf of the district. The community submitted its proposal, and by the deadline, one other proposal had been submitted—by a failing local charter school operator who proposed a school focused on arts and entertainment. After the deadline, a third proposal was submitted, focused on athletics, not academics. Note the subtle racism here—are Black children really only fit to entertain, whether through arts or sports? The city announced it would hold a hearing and make a decision on August 10th.

To the casual observer, these may all seem like similar proposals, but they are not. The community proposal is for an open enrollment, community-based school. Every student who lives in the attendance area is automatically eligible to attend. No one has to apply, pass a test, or be selected. If you live in Bronzeville, Dyett would be your high school. Neither of the other proposals do this. Both are selective enrollment schools. Students need to apply. They would NOT be community schools, open to any child from the neighborhood.

At the last minute, the city cancelled the August 10th hearing. This means Dyett would not open this Fall.

It was then that the Dyett 12 began their hunger strike. Their demand is simple: the community has worked for five years to produce a quality plan to save Dyett High School; the community held innumerable meetings and public forums. The proposal is academically rigorous, and focuses on science—one of the areas in which jobs are expected to be widely available for decades, as technology continues to develop at an unprecedented pace. There is no need for additional lengthy hearings. The community needs, and deserves, a community school.

The hunger strikers are now entering their third week without eating. Hunger strikes have serious consequences to people’s health, and this protest was not undertaken lightly. For the first three days, the body largely survives off of stored glucose. After three days, the body begins to live off of stored fat. After three weeks, the body begins to “mine” nutrients from muscles and organs. At this point, the body can begin to break down bone marrow, and cell walls can begin to thin. Eventually, one of the vital organs stops working, or cell walls become so thin they implode, no longer able to carry oxygen and nutrients through the blood stream. Either effect can be fatal. After four weeks, death becomes increasingly likely.

Last night, after his community budget hearing was constantly interrupted by protesters demanding he meet with the Dyett hunger strikers, the mayor spent a few minutes with them. However, according to reports, he committed to nothing, and claimed he needed more time.

Do we really have to wait until the first of the hunger strikers dies before the city will agree to provide Bronzeville with what most people take for granted: a neighborhood school?

Alan Mills is the Executive Director of Uptown People’s Law Center, a nonprofit legal organization that fights for the rights of tenants, disabled people, and prisoners in Illinois.