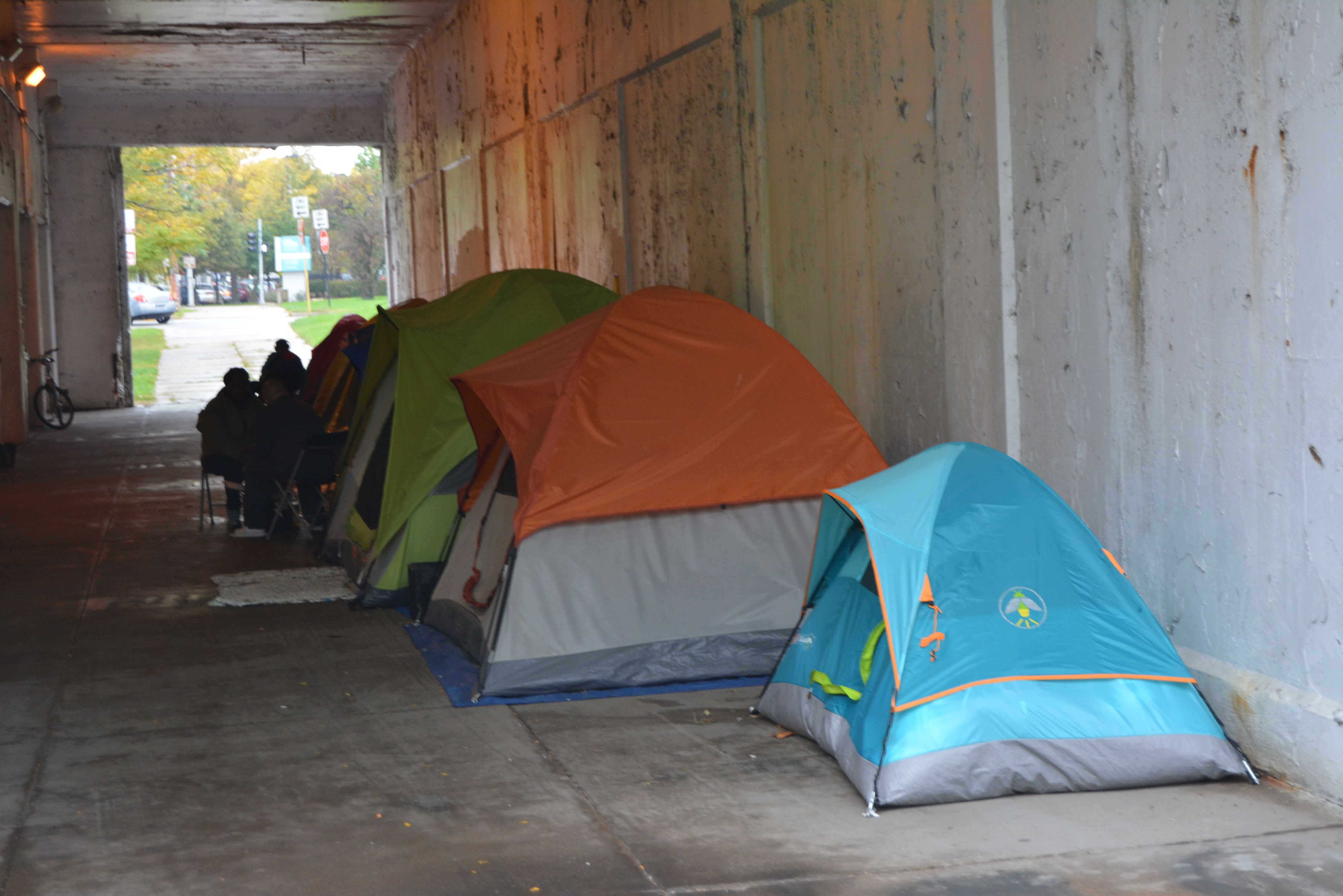 What is Uptown Tent City?

For years, dozens of people lived under the Lake Shore Drive overpasses at Wilson and Lawrence Avenues in the Uptown neighborhood of Chicago. They created their own community, known as Uptown Tent City. There, they looked out for each other. In the Tent City, they felt a little safer, more supported, and less isolated on the street.

The Lake Shore Drive overpasses needed repair. In October 2017, the Tent City residents were informed that they needed to vacate, to make way for the construction. UPLC filed a lawsuit, and asked for an emergency order to either stop the construction, or allow the residents to live near Stewart School until the case was decided. The judge turned us down, saying that there was no evidence that the City would actually ticket or arrest anyone if they put tents elsewhere.

The day before construction was to start, residents vacated the viaducts. Relying on the judge’s statement, they re-established their community on a nearby grassy strip on Wilson Avenue. The Chicago Police stated they would still have to move or else be arrested. When pressed, the police refused to say what the charges would be. We asked whether they could move to a couple of other locations, but the police said no—if they set up tents anywhere in Uptown, the same thing would happen.

That evening, many of the residents set up their tents away from traffic, on a grassy strip along Marine Drive between Wilson and Montrose. They were left alone that night. However, the next morning, the police returned. This time, the police said that the residents would be cited for “storing property on the public way,” and any property not moved would be destroyed. The Commander stated, on video, that this new interpretation of the law would be applied to public property anywhere in Chicago.

What Does This Mean?

There is now no publicly owned land in Chicago that homeless people can put down their possessions, let alone erect a tent. Since everyone needs to rest their head somewhere, this new rule effectively criminalizes being homeless citywide.

UPLC is fighting on behalf of the nearly 75 residents of Uptown Tent City. Chicago is in violation of the Eighth Amendment and the Illinois Homeless Bill of Rights. We currently have a lawsuit on behalf of the Uptown Tent City working to ensure that the residents can return once construction on the overpasses is complete, and guaranteeing the city can no longer effectively criminalize homelessness.

To support the fight and ensure that these residents are not made invisible, please donate to UPLC here!

Uptown Tent City in the News 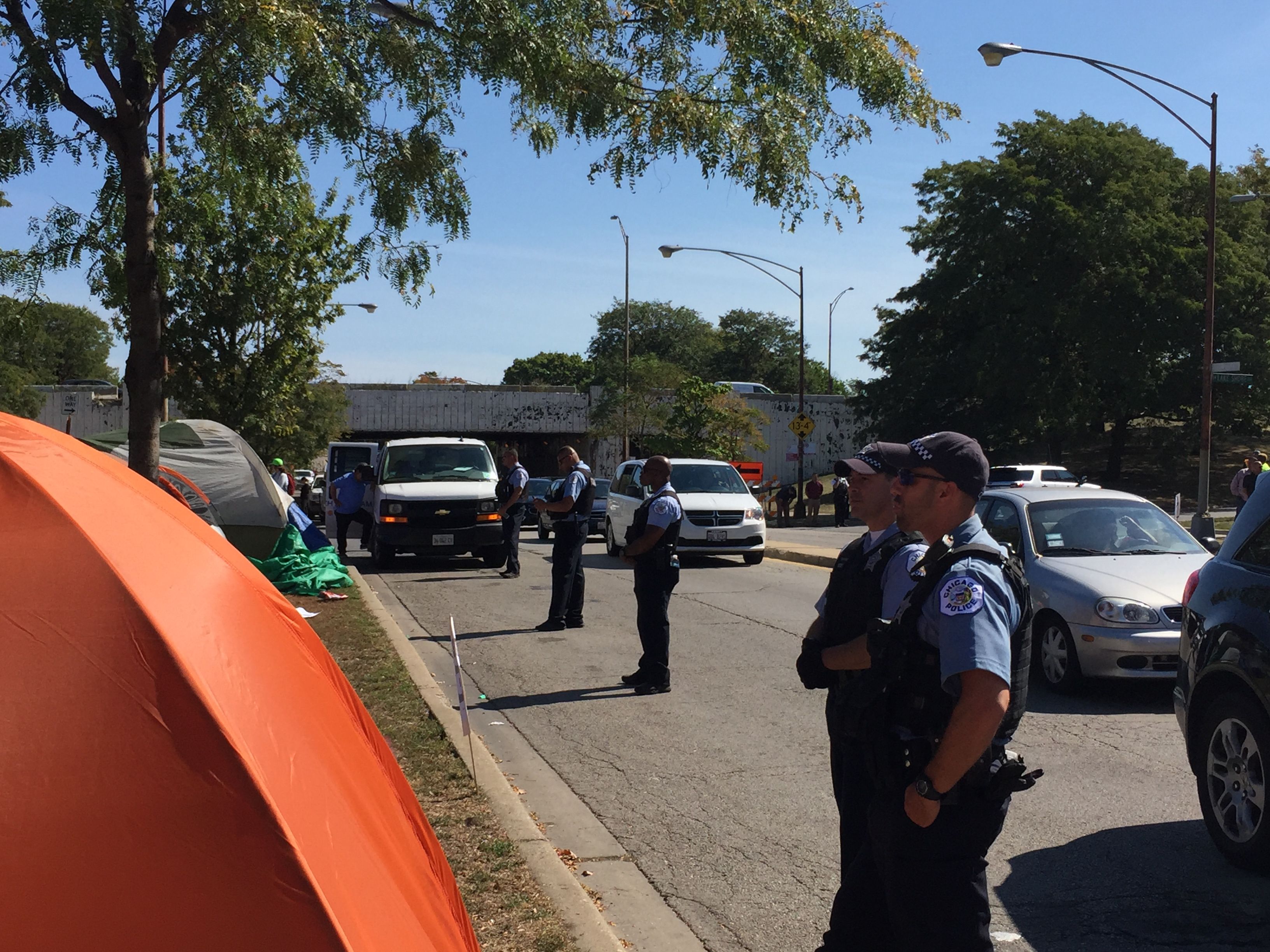 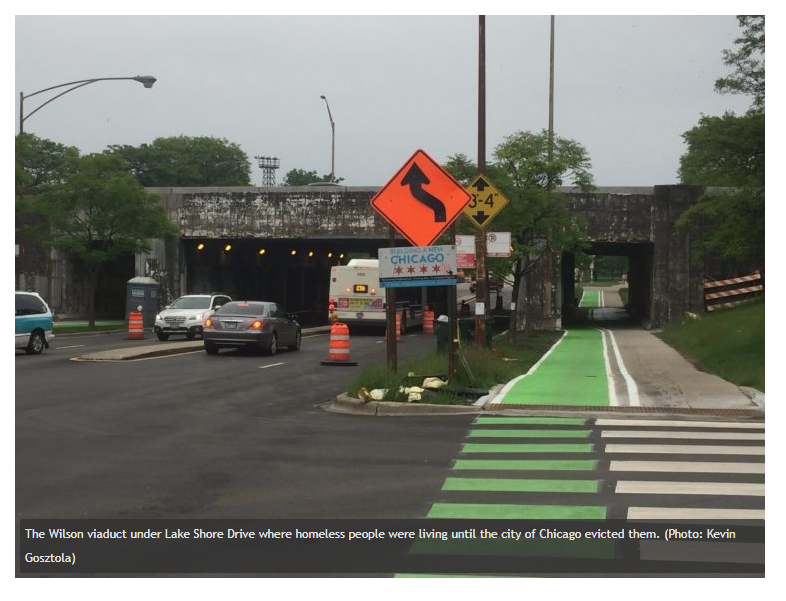 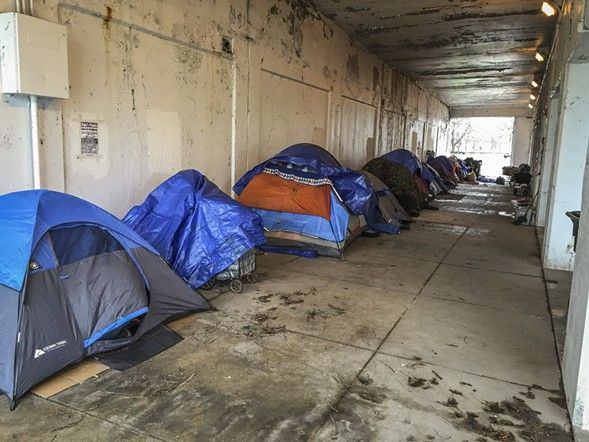 Fight for right to camp on city streets will continue despite legal setback, homeless advocates say 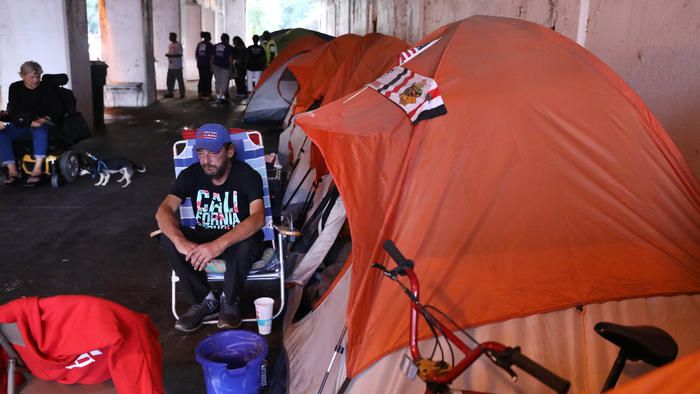 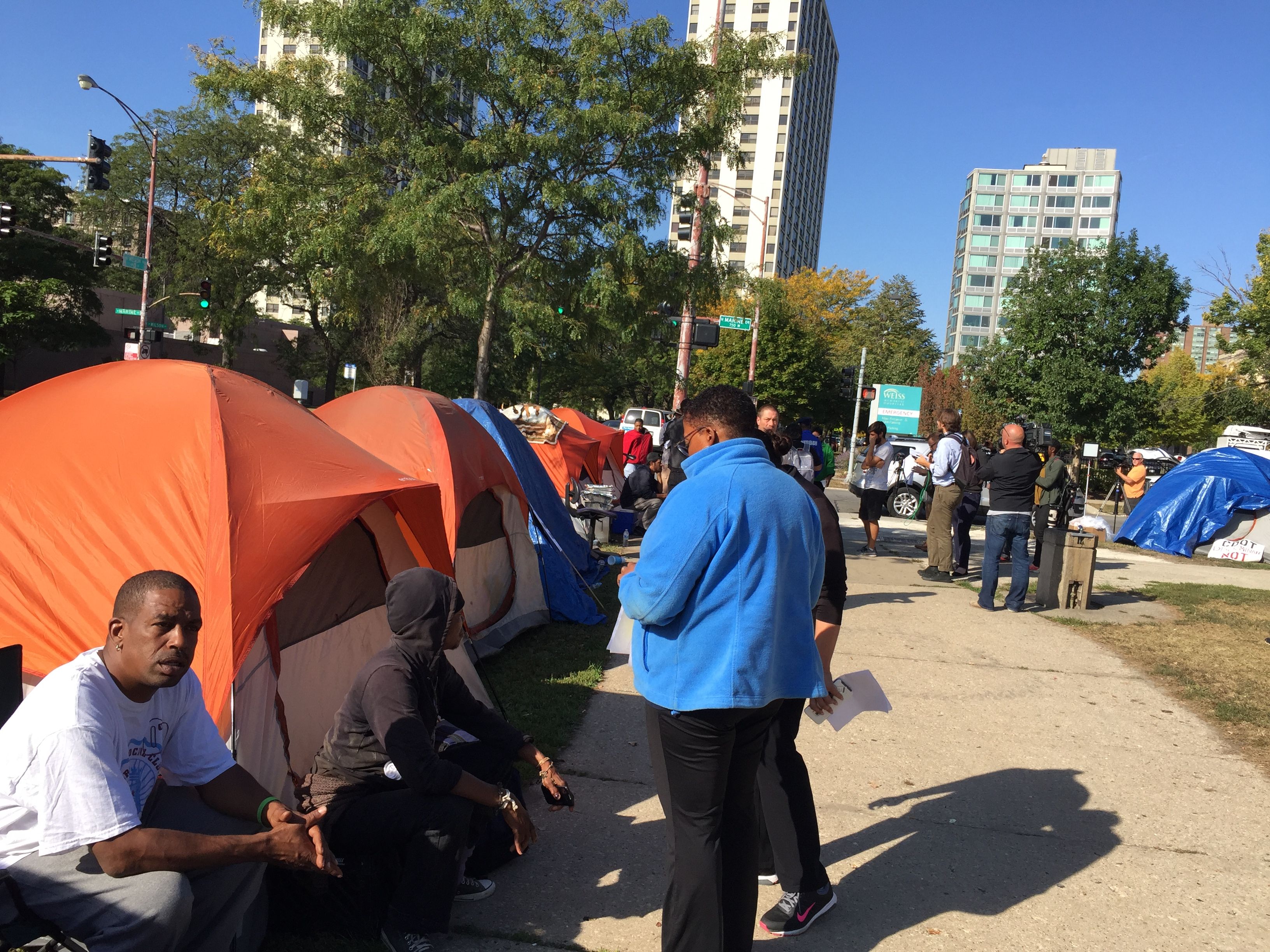 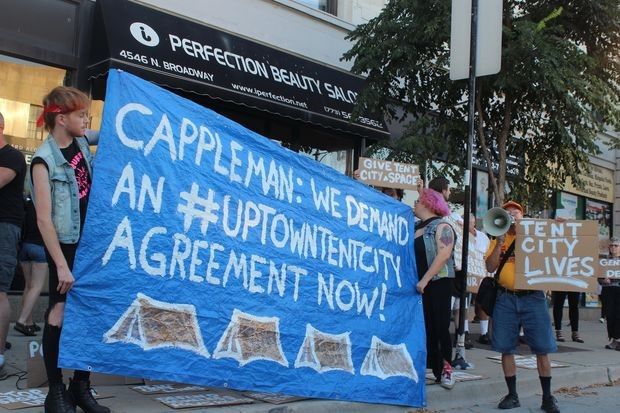 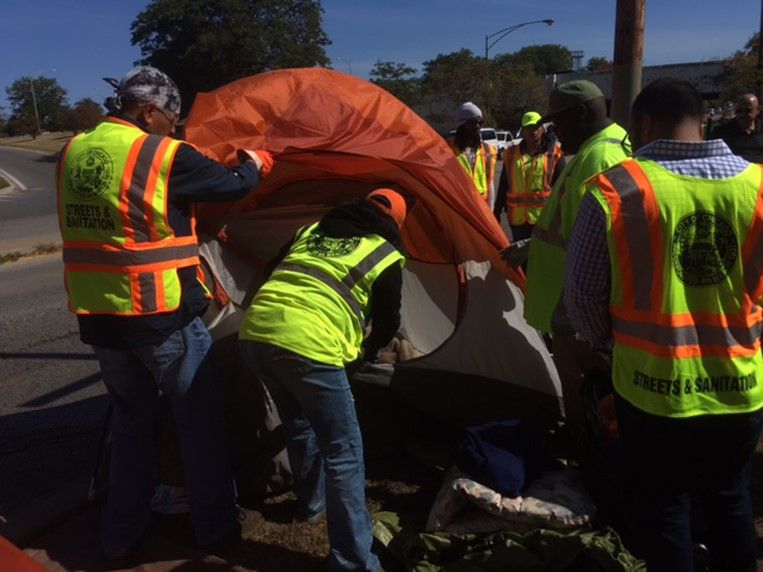 City removing tents that homeless had set up near Uptown viaducts 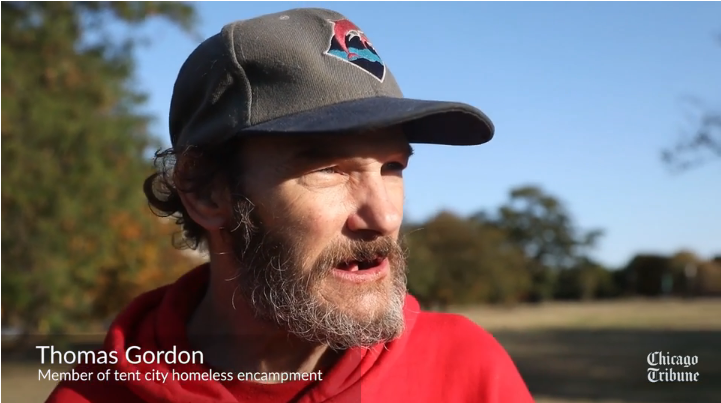